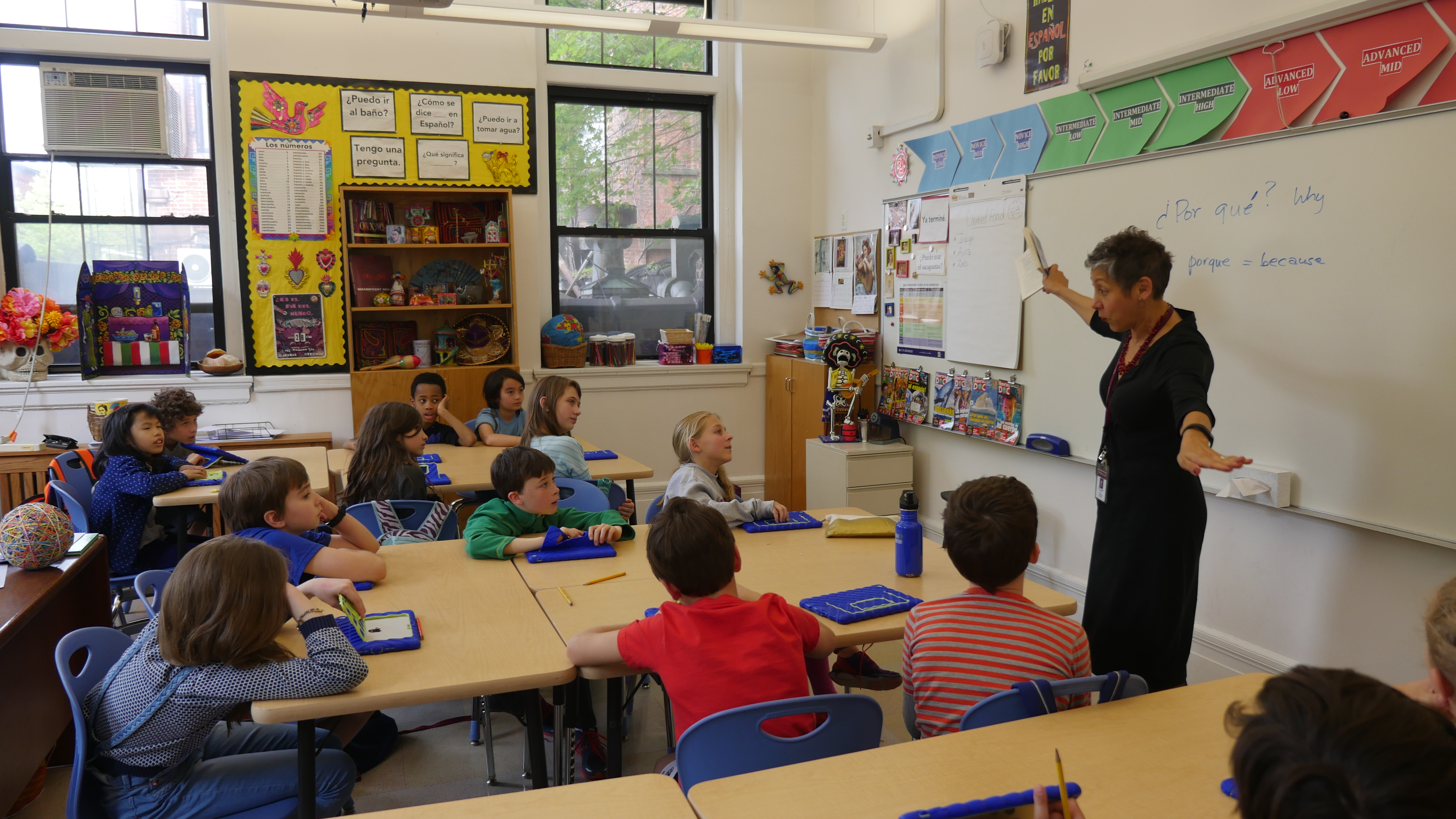 The World Language Department prepares students for the modern world by using acquisition of Spanish through the exploration of interdisciplinary themes, as a bridge to communities and other cultures around the world. By drawing on the intrinsic enthusiasm and joyful sense of competency that increasing proficiency can bring in a foreign language, our Spanish learners write, talk and demonstrate with tremendous pleasure,what they know. Acquiring functional language skills is essential to linking proficiency to real world application. We foster a vivid and exciting apprenticeship for our Spanish learners as they deepen their insights into the cultural perspectives of other societies, particularly those of Mexico, Central and South America, the Caribbean and Spain.

The theme of our fifth grade Spanish program is personal and public identities. Language acquisition centers around students' everyday lives and encourages exploration and understanding of the identities of individuals from Spanish speaking countries around the world. Sixth grade Spanish quickly moves on to expand from a focus on personal identity to that of families and communities. In their third year of Spanish, seventh grade students explore topics about contemporary life while eighth grade Spanish revisits all of these themes and expands to include global challenges as well as science and technology.

Fifth Grade Spanish is conducted in Spanish with limited use of English to maximize students’ time in the target language. Students begin the year communicating with high frequency words and phrases while gradually acquiring the skills needed to initiate and maintain simple conversations related to their daily lives; school, family, and recreation. As the year progresses, students begin to sustain sentence-level discourse in the present tense, and demonstrate increasing spontaneity when responding to direct questions or requests for information. Content and language functions are presented through the reading and discussion of novels, other texts and media suitable for the Novice level.

Sixth Grade Spanish is conducted primarily in Spanish (90%). Students begin the year communicating about self and family, daily activities, hobbies and personal preferences. In this second year of Spanish, topics expand with a broader focus on community and culture. Students are guided to create with the language they have previously acquired by combining and recombining known and new elements in order to move beyond sentence-level discourse to more connected and lengthier discourse in both the past and present tense. Increasing spontaneity leads students to be able to initiate, sustain, and bring to a close, conversations on familiar topics as they develop an increasing comfort in asking and answering questions in Spanish. Content and language functions are presented through the reading and discussion of novels, other texts and media. Sixth Grade Spanish is the bridge from the Novice level to Intermediate level.

Seventh Grade Spanish is conducted primarily in Spanish (90%). At this level, students creativity in language production increases, as well as their awareness and development of accuracy. Students in Spanish C further develop their oral and written presentational skills to produce both creative pieces, such as comics, videos, and short stories, and as well as letters and emails. Their production shows an increasing control of basic structures and different time frames. Students continue to combine and recombine their expanded range of vocabulary. As their spontaneity in speaking increases, they develop skills to maintain communication, such as paraphrasing, question-asking, and circumlocution. In Spanish C, Students utilize primarily authentic resources from the target culture: newspaper and magazine articles, short stories, poems and songs, interviews, and short videos. As students’ cultural competence increases so does their ability to interpret oral or written texts more accurately.

Eighth Grade Spanish is conducted in Spanish (90%+). Students continue to revisit components of previous themes and began to explore topics that are more global in nature. Interdisciplinary units, centered around art, science, and humanities, increase students’ vocabulary. Latin American and Spanish 20th century history and literature are explored for themes related to food, the environment, and geography, as well as art, social justice and the future. Students discuss events and experiences in various time frames and can handle social interactions in everyday life including those with an unexpected complication. Students read newspaper articles, can listen to conversations of native speakers and deduce main topics and tone, write short essays on various themes, participate in debates and practice stating their opinions and predictions for the future.