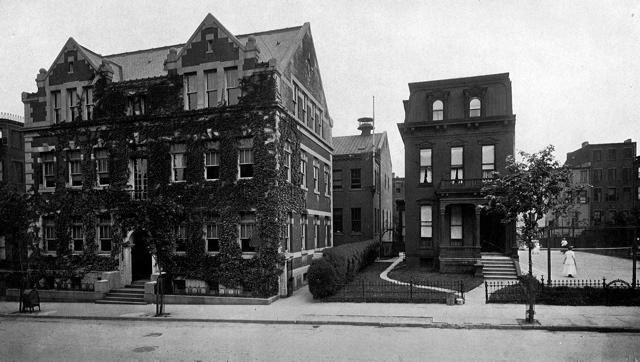 EARLY DAYS OF THE BERKELEY INSTITUTE

One of the oldest independent schools in New York City, The Berkeley Carroll School has a long and illustrious history. Though officially chartered by New York State on April 12, 1886, as a school for the education of young ladies, BC can trace its origins to 1883, the year that the Brooklyn Bridge was opened, and in which a series of informal classes was held by the Rev. Alfred C. Roe for neighborhood children in a "double villa" on Lincoln Place. In the fall of 1885, Mr. Roe, discouraged by his struggle against financial odds, asked a group of public-spirited men if they would assume financial oversight of the school, and a year later the Berkeley Institute, named for Bishop George Berkeley, an Irishman who was an early supporter of higher education in the American colonies, opened its doors to 55 children. At the time, much of Brooklyn was still farmland, but Park Slope had emerged as a fine residential neighborhood, easily accessible by five street car lines, so "the expense and annoyances of travel in crowded horse cars can be avoided," in the words of the school's first brochure.

In 1896, enrollment reached 190 students. Early on, the school had decided to admit boys into the kindergarten to fourth grades, after which many went on to attend Poly Prep in Bay Ridge. The board, chaired by one of the last mayors of the city of Brooklyn, David A. Brody, broke ground for a three-story building to be constructed beside the double villa, known today as the "old building" at 181 Lincoln Pl. and home to 13 classrooms. In 1898 an extension was added, the current dance studio, library and old performance space. Reports from the school newspaper of the day, the precursor to today's Blotter, told of the girls raising money "for the suffering in Cuba" due to the Spanish-American War and of poets Edwin Markham and John Masefield visiting the school to read their works. 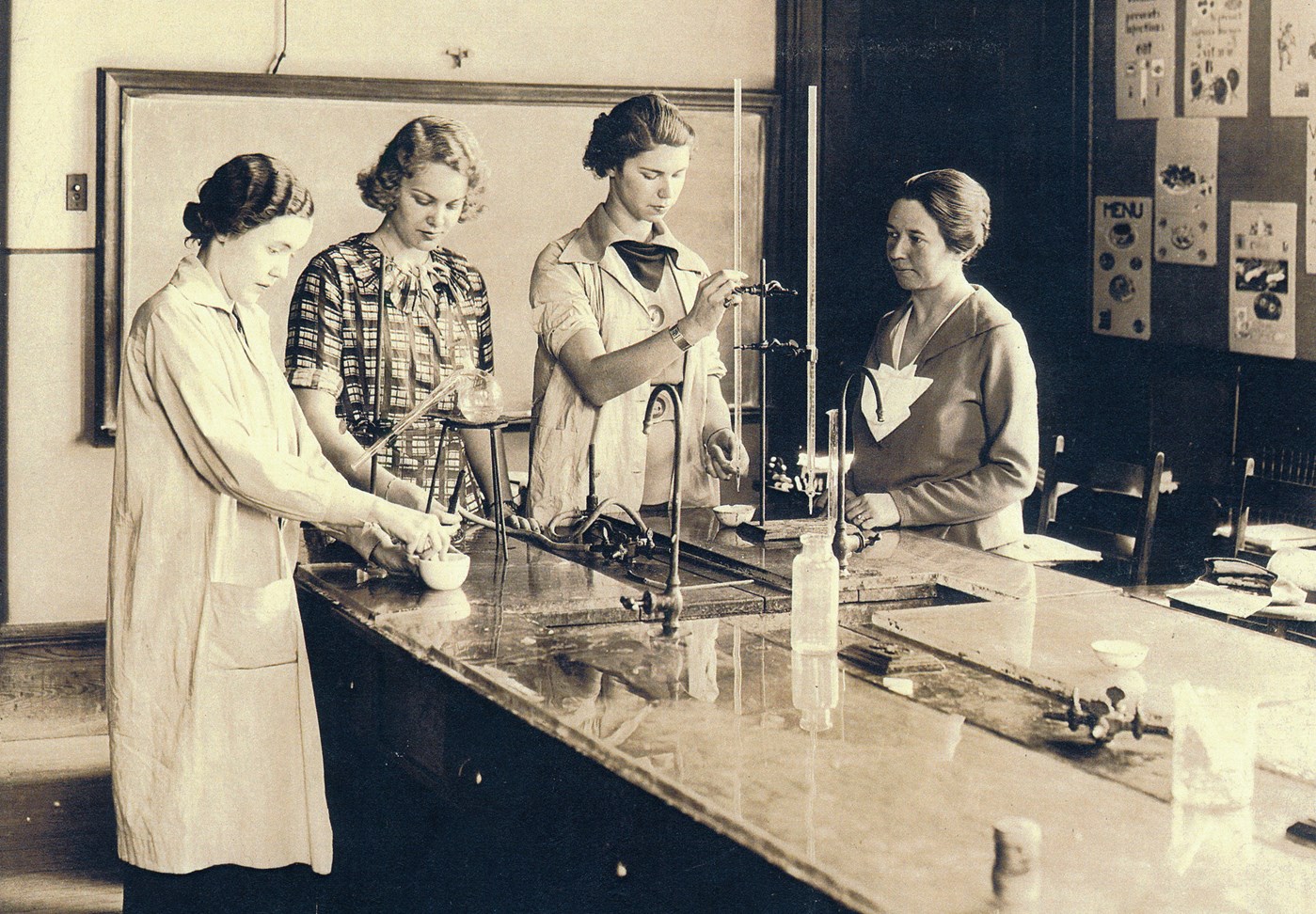 Philosophically, the school followed the "Vassar" mode: Girls attended academic classes from nine to noon, went home for lunch and returned at one o'clock for an afternoon of physical education and team sports. Therefore, the heavy demands of the academic schedule were balanced by an afternoon of athletic activity. The gymnasium was located in what is now the dance studio in the basement of 181, and among other activities, the girls played basketball — in dresses, of course — despite the low ceiling and several support columns in the middle of the gym floor. An early copy of the Berkeleydian, a sort of official school almanac, contains a riveting account of a narrow loss to the girls of the Pratt Institute, by a remarkable score of 8-6.

The school was successfully promoted as a healthy place, both because of the curriculum and its location up on "the Prospect Heights." In those days of frequent epidemics and high childhood mortality, fresh air, clean water and the adjustable chairs in the classrooms described in a 1901 catalogue were big selling points.

In 1917, Miss Ina Clayton Atwood began her 30-year tenure as headmistress. The year before, the girls had "switched from horses and coaches to an autobus" to transport students, according to the Berkeleydian. The girls worked for the Red Cross, knitting sweaters for soldiers during class lectures. One of the eight founding schools of the Parents' League in 1913, by 1920, the Berkeley Institute had developed an outstanding reputation, with graduating seniors receiving automatic entry into many fine women's colleges: Vassar, Mount Holyoke, Smith, Wellesley and Radcliffe, among others.

Apartment house life contracts living space. It eliminates attics and cellars and yards. Children have neither play space nor storage space. The disastrous effect of this crowding out of childish activities is evidenced by the rapid increase in nervous diseases among children and young people. More than ever is a modern school community essential to supply the elements of normal living — space to work, space to play, quiet for study — which modern living crowds out.
-From a 1929 Building Project Case Statement

EXPANSION, THE GREAT DEPRESSION AND WWII

In 1929, the board of trustees undertook a $300,000 building project to expand the facilities on Lincoln Place. Cancelled because of the Great Depression, the project would have added a new gymnasium and rooftop playground, 11 classrooms, a new art studio and a larger dining room and kitchen, permitting the school to grow to a total enrollment of 450, a little under the size of the current Middle and Upper schools combined. 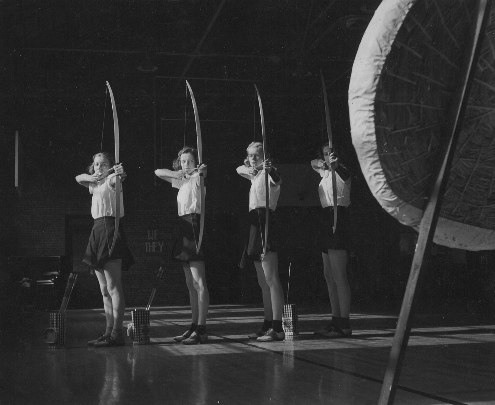 The Depression and a series of epidemics had a serious impact on enrollment; plans to expand the school were scrapped in 1930. In 1936, the school celebrated its jubilee year, and in 1937 construction started on a new gymnasium, a much more modest plan than previously considered. In 1940, students raised money for refugees in England and France, as war came to Europe.

Some of us in the Class of '41 spent all our K-12 years at Berkeley in what were halcyon days of innocence and wholesomeness. Our Lower School classes featured "French Without Tears," sewing Colonial samplers and hand-dipping candles, struggling with fractions and missing the boys who left us in fourth grade. In the Upper School an outstanding faculty challenged us with algebra and trigonometry, Latin, more French, civics, history (American and art), science, principles of grammar and writing, English literature, studio art classes and a period for music and group singing. The new gym building was a boon to our extensive athletics program, be it hockey, basketball, volleyball, tennis or archery; competition was rife between both our own Black and Gold teams and other schools.

Chapel, with the seniors in caps and gowns, was a highlight of the week. After-school activities included the Romany Club, the School Settlement Association, the Blotter, the yearbook, gym meets and pageants, a costume "Suppressed Desire" party or a fancy Team Dance. School spirit was high, and pride in our alma mater was great. We wore polo coats, saddle shoes, skirts and sweaters and sometimes, daringly, lipstick. We graduated in long white dresses carrying red roses and went off to the next stage of our lives reluctant to leave our cherished school and friendships that endure to this day. But we were well prepared and eager to see what life had in store for us.
-Dona Chumasero Everson '41 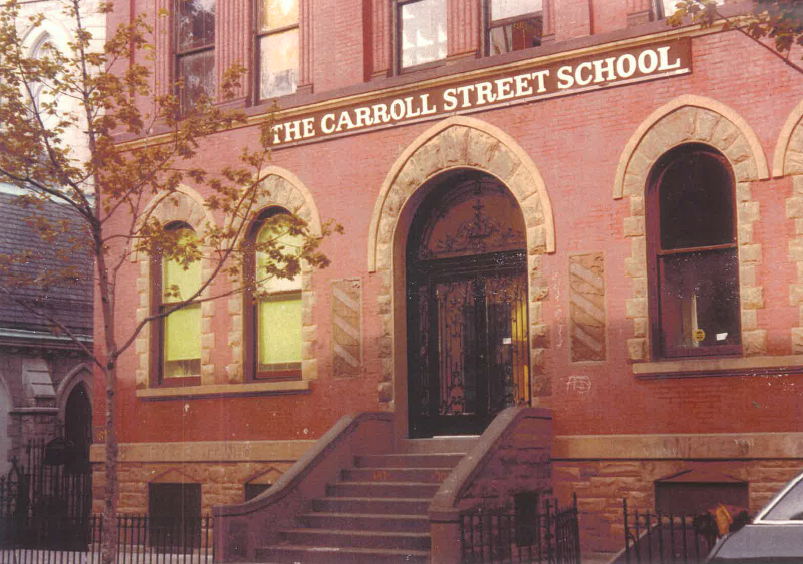 The departure of the Dodgers for sunny Los Angeles in 1957 accelerated a decline in the fortunes of Brooklyn that had begun shortly after WWII as city dwellers increasingly heeded the call of suburban life. The closing of the Brooklyn Navy Yard in 1966 was a symbolic low point in Brooklyn history. Gradually, however, young families were beginning to move to Park Slope. Efforts to restore and renovate neglected brownstones began in Brooklyn Heights and soon spread. A group of parents and educators started the Montessori School of Brooklyn with one teacher and 25 children, in a rented room on Beverly Road and Ocean Avenue. The school's educational philosophy was based on the pedagogical theories of Dr. Maria Montessori, with spaces and materials organized into areas of interest to the children in order to encourage structured learning. Meanwhile, at the Berkeley Institute, boys were admitted to the seventh and eighth grades for the first time.

In 1974, the Berkeley Institute became fully coeducational. One boy, John Ingersoll, entered the Class of 1974 in his senior year and became the first male graduate of the school. In Brooklyn, the brownstone revival continued to spread in Fort Greene, Carroll Gardens and Prospect Heights. However, the enrollment at the Berkeley Institute declined as its long-time constituents moved out of Brooklyn. Also that year, the growing Montessori School of Brooklyn purchased the 701 Carroll St. building, previously the home of St. Francis Xavier Academy and St. Francis de Sales School for the Deaf.

A visitor to the school in the early 1970s would have entered the campus by walking up the steps below the lintel on which the words "Berkeley Institute" are carved...In lieu of a high school commons, it was here that Upper School seniors were given the privilege to congregate and to smoke cigarettes. There was, of course, a faculty lunchroom located in the basement where more serious smoking occurred. Those who did not puff away there were a distinct minority.

If the visitor arrived on a Tuesday morning, he/she would have been invited to attend the weekly nondenominational but obligatory chapel, presided over by a visiting clergyman or faculty member. It was also customary at this time for a clergyman to give an invocation and benediction at the high school graduation exercises.

In the 1970s, a request to meet the Middle School director would have been greeted with a puzzled expression. There was a Lower School for grades one through six and an Upper School for grades seven through 12. Adolescence had been discovered, but middle schoolers arrived at Lincoln Place only with Dr. Zubay.
-Dr. Marvin Pollock, Upper School History Teacher 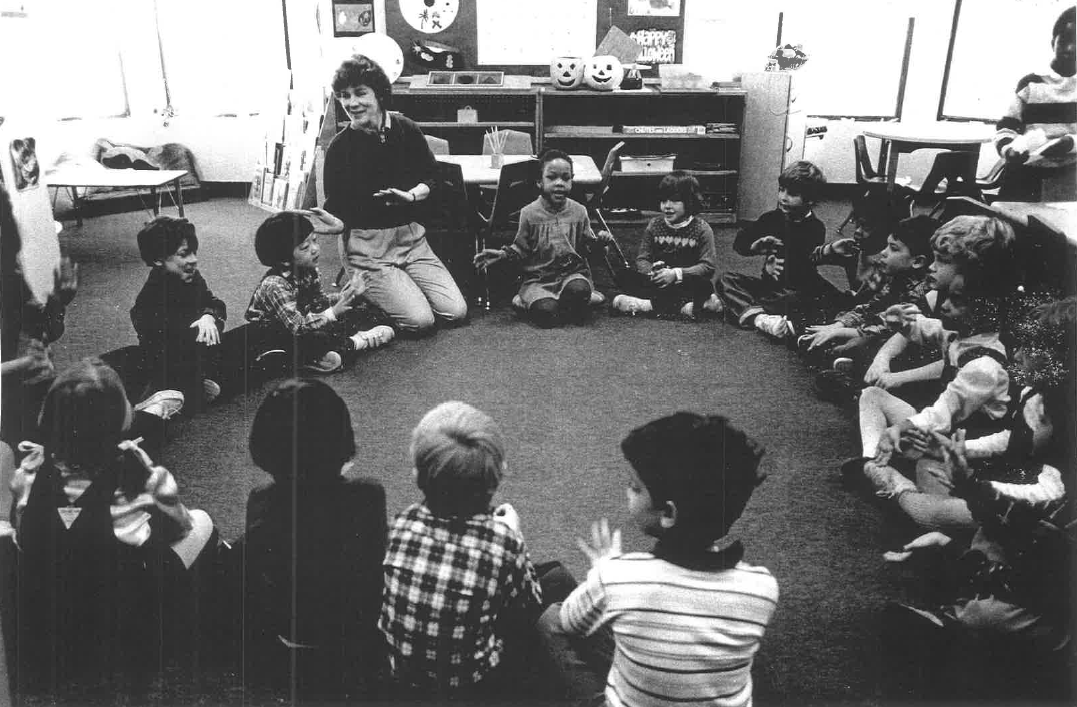 The Montessori School of Brooklyn's board of trustees appointed Dr. Bongsoon Zubay as head of school in 1975. In 1979, the school's name was changed to The Carroll Street School to reflect its expansion through sixth grade. In 1980, The Carroll Street School added seventh and eighth grades and in 1981 expanded by purchasing and renovating the 712 Carroll St. building for early childhood instruction.

Picture a single floor quietly teeming with children aged 3-7. The children are intently and happily exploring life skills like washing dishes or making art or listening to music or reading or any one of a million activities that will enable them to find their place in the larger world. That's the way I remember the Montessori School of Brooklyn in the 1970s when my daughter, Megan, became a student and I first discovered it and became involved in it. I loved the school immediately and over the next 30 years of my relationship with it, that love, and the school itself, have been nurtured and have flowered into many amazing and beautiful blossoms.
-Marlene Clary, former Upper School English Teacher

THE MERGER AND PRESENT DAY

In 1982, the 96-year-old Berkeley Institute and the young Carroll Street School merged to create a PreK through 12th grade college preparatory program with 480 students — there were 15 students in the new school's graduating class on June 13, 1983. Berkeley Carroll now enrolls more than 900 students and the richness of our institution stems in part from our commitment to diversity. Berkeley Carroll is fortunate to be located in Brooklyn, a borough that boasts, among many other things, a vibrant music scene, a zoo, one of the largest public library systems in the country and a world-class art museum. The vitality of our surrounding community is reflected in the students and faculty of The Berkeley Carroll School. We consistently partner with technology incubators and entrepreneurs, craftspeople, writers and editors, non-profit groups and arts institutions to extend our classroom into the world. 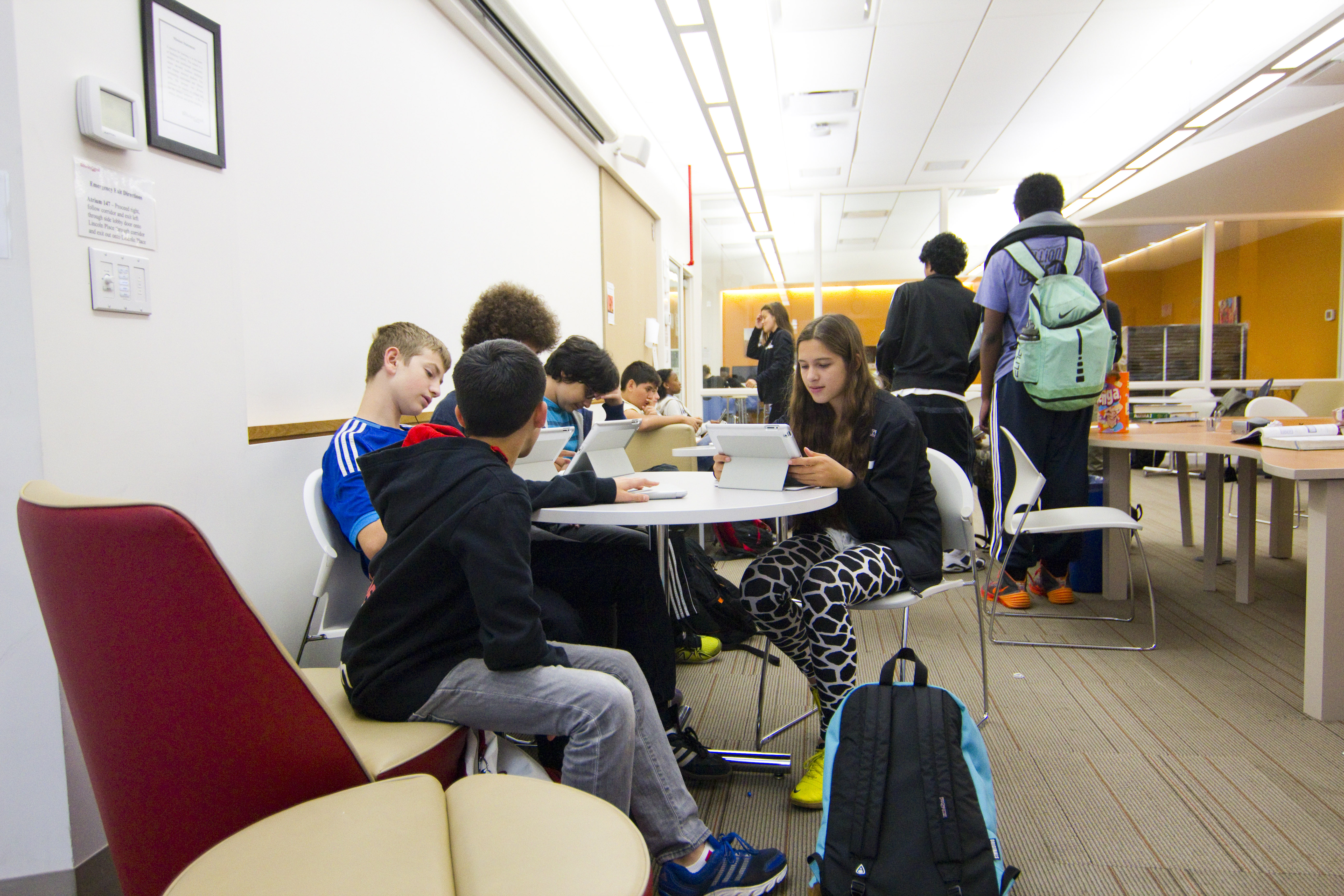 Berkeley Carroll continues to be a vibrant intellectual community sustained by a passion for learning to this day. The school prizes innovation and intellectual risk-taking in an effort to inspire critical, ethical and global thinking in our students. In 2012, we eliminated Advanced Placement courses, which allowed us to create a more innovative, interdisciplinary curriculum and provide more opportunity for original research. That same year, we implemented our iPad initiative (by the 2014-15 school year every student in grades three through 12 was using one) and began our Spanish partial-immersion program in the Lower School. In recognition of our commitment to providing our students with a 21st century education, we were one of only six schools in the United States to be designated a 2012 "School of the Future" by the National Association of Independent Schools. A current focus is on incorporating STEAM (science, technology, engineering, arts, math) into our curriculum. This movement encourages schools to include arts and creativity in traditional STEM education to prepare students for college and the workforce of the future.
Powered by Finalsite