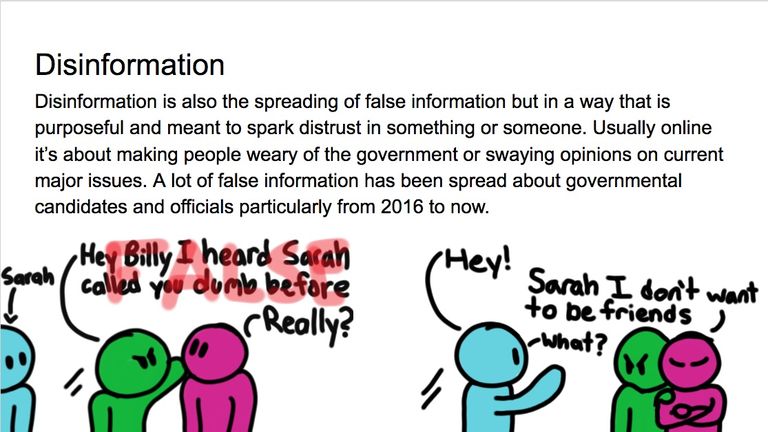 It's become harder and harder to tell truth from fiction in the news, and the proliferation of social media has only made matters worse.

Middle School Humanities Teacher Mike Wilper realized that finding credible sources in an online landscape littered with internet trolls, Twitter bots, and misinformation was a challenge for adults, but how much more difficult must it be for his students?

It inspired his class's history project, called "Truth, Propaganda, and the Weaponization of Social Media." Eighth grade students sought to answer the guiding question, "how does propaganda exploit human psychology?"

Wilper says he got the idea for the project after reading the book, "LikeWar: The Weaponization of Social Media." With misinformation campaigns being waged online, the class is an effort to give students a better understanding of the psychology behind conspiracy theories and the spread of false information.

The project connected to the eighth grade unit on World War I, which saw a propaganda effort eerily similar to today's disinformation campaigns waged through social media. Students felt excited by the project, learning about a medium they use constantly, saying it was both academically and intellectually challenging.

"We're 13 and 14-year-olds and always on social media, so this is really important," said Lane R. '23. "I actually looked forward to working on homework for this project because it connects to my life."

The students learned about the "rules" of conspiracy theories and propaganda, using critical thinking skills to assess claims and identify misinformation. Their final projects analyzed the psychological nature of falsehoods, from spreading rumors between classmates to larger conspiracy theories like the Earth being flat.