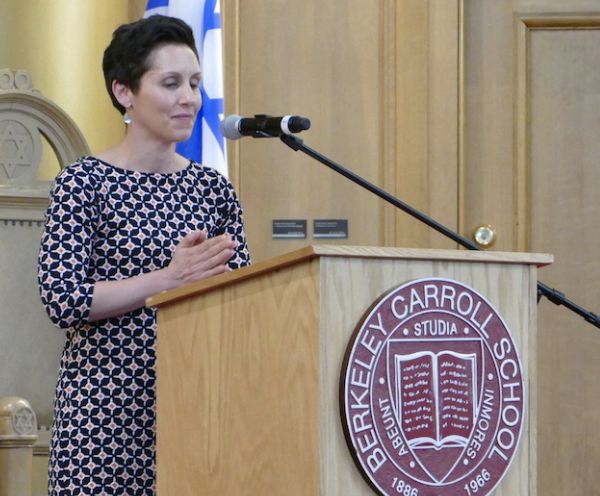 "The Patriarchy Will Always Have Its Revenge"

"Republicans Have A Simple Choice: Vote To Confirm Kavanaugh Or Get Slaughtered In November"

"Pigs All the Way Down"

"Sick to Your Stomach? #MeToo"

"The Muzzle Comes Off"

These are some of the headlines of the 30 or 40 articles I have read on this topic in the last week or so. A few of you might ask, What topic?

This morning, while we are here at Sterling Place, a hearing is going on in the United States Senate. Brett Kavanaugh, who was nominated by President Trump to replace retiring Supreme Court Justice Anthony Kennedy, and who seemed poised to be confirmed by the Republican majority in the Senate, is today testifying in front of the Senate Judiciary Committee, as is Christine Blasey Ford, a research psychologist who reported that Kavanaugh sexually assaulted her when they were in high school -- that, at a party, a drunk Kavanaugh pinned her down in a bedroom, covered her mouth, and groped her while a friend of his watched. In Dr. Ford's words, "I thought he might inadvertently kill me. He was trying to attack me and remove my clothing."

As a reminder, or a quick lesson, Supreme Court Justices are nominated by the President, are confirmed or denied by a simple majority of the Senate, and then serve for life -- impeachment is the only vehicle for removal.

Dr. Ford's allegations against Kavanaugh, which fully surfaced just 11 days ago when she agreed to let her name be public, have created a cultural and political firestorm. I want to speak about the allegations and the reaction to them a bit this morning. I feel they are notable for a number of reasons and that they are especially relevant to you as high school students processing the political climate in this country and, more specifically, mixed -- and gendered -- messages you are probably receiving about appropriate, even "normal," behavior.

Here are some of the specific elements of this situation that I have been thinking about, and that you might also be thinking about or interested in:

My rather voracious reading on these topics has made me appalled and very sad. As someone who spends much of my time with high schoolers, I am disgusted and incredulous that people would say a sexual assault in high school doesn't matter or is not important or is not harmful, or that high school kids might not know better -- and, that if anything did happen, it's just high school fun, boys being boys, perhaps a little out of hand, similar to Trump's pre-election comment about "grabbing pussy" when he wants to: not a big deal, just "locker room" talk.

I am disgusted and incredulous that many in the Senate immediately said that this allegation would not change their vote -- even before they hear what Ford and Kavanaugh say today: because this means that it is immaterial to their thinking whether the allegations of assault are true or not. I am horrified that President Trump has publicly mocked, disparaged, and dismissed both women. I am disgusted and angry that a response to a sexual assault allegation comes down to party affiliation and loyalty.

I feel sad and angry that Ford's family, including two kids close in age to you, has had to leave their home, hide out, and hire a security team because of the number of death threats she has received. I would feel all these same ways even if it turned out that Kavanaugh were entirely innocent -- because all of the reactions I just described were reactions to the allegation-- not a hearing or an investigation -- and all demonstrated an unwillingness to seriously consider the allegation. What if everyone said, "Wow, these are serious allegations -- a serious, deliberate investigation is necessary."

But despite the fact that that is not what happened, I am encouraged by one thing: by the number of women speaking out. The word "mansplaining" developed in response to the common phenomenon of men explaining obvious things to women, even things about a women's own experience. The word is an insult: you don't want to be a mansplainer. "Womansplaining," on the other hand, is not so much of a thing, though I looked it up when I was writing these remarks and the phrase is in use -- I did not make it up. But I'd like to attempt to redefine it as an active, empowering response to a culture where both mansplaining and other forms of misogyny are the norm.

All year, and for longer than that, but in huge numbers in the past two weeks, women writers, women survivors of assault or harassment, continue to produce nuanced, well-argued, passionate pieces explaining why we should listen to Ford and others, explaining why it makes sense (and is not suspicious or damaging) that she is just coming forward now, explaining why it matters that this happened, even if they were in high school and it was 30 years ago, explaining how elite, privileged educational cultures are designed to protect themselves and their people, explaining how #metoo has mattered, but has not succeeded, explaining that the fact that we are having another Supreme Court sexual harassment hearing led by a judiciary committee that contains 11 male Republicans, 6 male Democrats and 4 female Democrats, is indicative of a problem -- a problem in our politics, our Senate, and our culture.

Mansplaining became part of the lexicon because of the tendency of many men to explain such obvious things to women in such a condescending way. What these women are explaining should also be very obvious. For example, Trump publicly remarked, if this really happened, why didn't she say something 30 years ago? To which a chorus of mostly women reply, patiently, calmly, and furiously, explaining what should be obvious: that women are punished for speaking out, that their behaviors and proclivities are scrutinized, mocked, and questioned, that they feel they would be more damaged than their attacker. Women have not only responded by explaining, but also by coming out with their own stories. Telling them. After many years. So we can listen, read and learn. I have learned a huge amount from all I have read in the past two weeks. If mansplaining as a term emerged from women feeling fed up with men condescendingly explaining, and so points out and calls out that behavior, then womansplaining gives women the power not only to call out the misogyny and the double standard -- but also to take back the language and claim themselves as experts in their own experience. Again, Rebecca Traister says it well:

[Debby] Ramirez, [Kavanaugh's second accuser,] openly admits that her memory is patchy, that only flashes are clear, that she was drunk to the point of slurring. Each of these things, she clearly understands, undermines her tale, leaves her open to a different kind of assault now, 35 years later. And yet she not only decided to tell her story; she, like Christine Blasey Ford, opened it up to investigation. The imperfection of her victimhood did not stop her from speaking, from insisting that her view of events should count just as much as the blithe, blanket denials being issued by a man we have no reason to believe remembers his drunken youth any more clearly than she remembers hers, yet whose word is reflexively granted more authority.... As women insist on wresting the metaphorical hands from their mouths, and we commit to listening to and examining what they have to say, this broken world may not get fixed, but it will never be the same.

To be clear, there have also been impassioned, eloquent,and important male voices in support of listening to Christine Blasey Ford, to Debby Ramirez, to the many women who continue to speak about their experiences -- not shaming them, tending to believe them since they have nothing to gain and so much to lose by coming forward. It is important that men are speaking up too, but on this topic, it's the voices of the women that are most encouraging and radical.

This has been a political speech. Any time you speak about an oppressive structure, or "system of power," point out its flaws, and express a wish to dismantle it, that is political. I am comfortable with you listening to me give that kind of political speech. It is unfortunate that my remarks have anything to do with the two major political parties in this country. Because of the specific political discourse regarding this Supreme Court nomination, I realize that this speech can also be seen as anti-Republican -- because there are only one or two Republicans in the Senate who have said they may withhold judgement until the hearing is over. I wish my remarks were not so political in the partisan sense. And I think it's dangerous -- to you and for you -- to witness a national conversation about sexual assault that falls on party lines You could read a bunch of headlines and come away with this: Democrats think sexual assault is bad and Republicans not as much. That is a dangerous simplification that we should all resist. The climate that produces this dichotomous simplification is dangerous. And I think that you as young people know that this simplification is not true, though I would not blame you for being confused and wanting to ignore it all.

I mean, it is a weird and troubled time when we have images of someone's high school calendars and yearbook on the front page of our major publications. I spent all this time talking to you because I think it's important that you know what is going on today and what has gone on in the past two weeks, and what will happen next. I wanted to talk you through how I have developed my own point of view. You certainly don't need to have the same point of view. Again and again this year as we encounter and talk through the crises of our time, I hope you will feel challenged to tune in, not tune out, to have more authentic conversations than our political leaders are having, and to resist the dangerous simplifications of our political moment.

Goldberg, Michelle. "Pigs all the way down: Kavanaugh and Our Rotten Ruling Class." September 24, 2018.

Pinsker, Joe. "What Teens Think Of the Kavanaugh Nominations." The Atlantic. September 21, 2018.

Weiner, Jennifer. "The Patriarchy Will Always Have Its Revenge." New York Times. September 22, 2018.